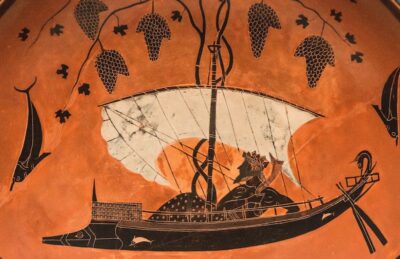 Throughout history, we can sense a struggle between different ideals and temperaments, we see an alternation between Apollonian and Dionysian societies. Apollo represents order, fact and clarity – while Dionysus reflects pleasure, intuition and dreaminess.

A good balance between the two aspects contributes to high cultures and progress, as in classical Greece, the High Middle Ages/Renaissance and the late 19th century.

Perhaps the two archetypes are a representation of our brain hemispheres, with the left dealing with sequencing, thinking in words, linear thinking, mathematics, facts and logic. While the right hemisphere is associated with emotion, visualisation, imagination, intuition, holistic thinking, rhythm and art.

Sometimes both pairs of opposites are linked to political ideologies, but it may not be so obvious which ideological orientation represents what? The right can sometimes be associated with facts, but also with intuition and faith. And the left can be associated with desire and experience, while their progressive zeal for change is often based on some kind of rationalism.

The political concepts of left and right were born during the French Revolution. Those who demanded change sat on the left in the National Assembly; through rational and progressive plans, they wanted to transform society to function more efficiently and fairly. While the right believed that society had slowly evolved organically and naturally over millennia, change was not something that could be implemented in a hurry. They also affirmed faith, religion and more esoteric values. The right was not as enamoured with the new enlightened ideal of science. In those days, the left was Apollonian, and the right Dionysian.

The French Revolution ended in a bloodbath, an emperor soon took over France, leading the nation into war. In the 19th century, people learned to combine the Apollonian and Dionysian aspects of life. People embraced both science and spirituality, both the rational and the obscure aspects of existence became visible. One could be both a scientist and a mystic. For a short time in our modern history, dualism was affirmed. And many still consider the turn of the last century, before the two world wars, to be an exceptional high point in our civilisation. Science and the fine arts flourished, never has humanity achieved so much in such a short time. The journey from primitive steam engine to airplane took no more than 100 years. All while art, architecture and music flourished.

The two world wars are, as usual, difficult to explain, but industrialization and new technologies are of course contributed to the enormous destruction. Faith in the rational began to degenerate with skull measurements and racial biology, the natural end of the era being the atomic bomb, perhaps man’s most pernicious creation. Society degenerated into an Apollonian catastrophe. Apollo, the beautiful god kills not in haste and anger, but with calculation and icy calm.

The 1950s and 1960s soon saw a shift. Youth revolts, music, drugs and experimentation began to challenge the rational and mathematically planned society. It was a Dionysian revolt, which is still going on today. The left saw their chance to hijack youth culture, they hastily hid their rational baggage and became more intuitive and soulful, because it suited the spirit of the times. Gone was scientific socialism and historical materialism. And soon the ideas would mutate and form the environmental movement, which slowly took over the leftist agenda in most Western countries, with its critique of progress, climate alarmism and an almost museum-like view of animals and nature. For most supporters live in big cities and rarely visit forests, mountains and seas.

Achieving a balance between the two primal forces is difficult. Once it swings in one direction or the other, cacophony and chaos are reinforced. We have no manual or map book for this purpose. We live in a culture that has long repressed the Dionysian aspects of life, few go on spiritual journeys, intuition is devalued, art and music consist mostly of dry contemporary commentary without skillful craftsmanship, feeling and passion. The Dionysian counter-movement took off. It is difficult to affirm spirituality and transcendence among ugly graffiti, concrete and bus timetables, it is limited to fantasy literature, yoga and new age, and a chilling sense that all is not right in the present consumer society. But Dionysos, the new god, will not give up, he has only just begun.