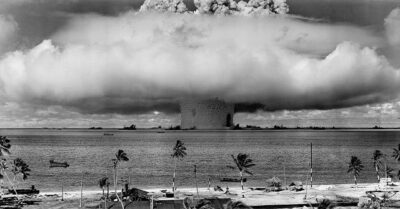 When I was a child, the future was full of hope, we were dreaming about travelling with hovering vessels between skyscrapers. And we believed that man would soon be exploring the stars. Nuclear power was risky, but it gave us a fantastic opportunity for infinite energy. And yes, mankind had many problems, but they would be solved by research and progress. Nothing was impossible. The future was bright.

Today, the picture is a bit bleak; people suffer from climate anxiety, we are thinking about becoming vegan and skipping air travel. We have an ambivalent approach to technology, we want to devote ourselves to yoga and self-realization, but we flee to social media and binge watch TV shows. It’s an introverted culture, and the future is mostly dark.

We white Europeans also carry a diffuse sense of guilt. We started both world wars that led to the deaths of millions of people, the holocaust, the nuclear bombs over Japan; a meaningless slaughter that stains our grand western civilization.

We invent fantastic things and simplify life for the rest of the world, but we feel the guilt of war, imperialism, nationalism, colonialism, capitalism, socialism, racism, climate change and oppression of women and homosexuals. Most of it is our fault, that’s what we imagine. It will be quite difficult to continue building our culture on this foundations.

On the other hand, all kinds of weapons of mass destruction and hydrogen bombs in the hands of us ordinary jealous, revengeful and greedy people. We have not yet annihilated ourselves, although we could wipe out the earth several times over. Maybe we have a good deal of goodness and reason after all?

All civilizations that achieve our technological level risk total annihilation. That’s the bitter truth. Whether it is due to calculated maliciousness, revenge or ignorance, the threat is there. Especially in the beginning when the technology is new and untested. Against this background, we have performed relatively well.

Maybe it’s a test? The lottery of the gods? Or is it just the obvious course of scientific development?

Instead of exaggerated self-pity and nihilistic criticism of our culture, perhaps we should feel fortunate. Our civilization passed this deadly breaking point.

We survived. We didn’t obliterate each other. And it’s time to move on.