The postmodern myth of creation 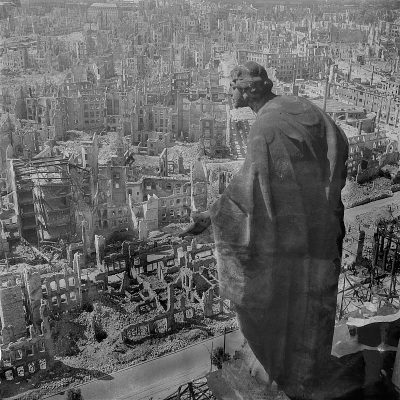 The creation mythology of Western civilization include by necessity the Greeks and the Romans. Although many Europeans have no direct relationship with these early Mediterranean peoples, we highlight their cultural deeds.

They are the dawn of our continent. We have all borrowed our alphabet from them, our legal frameworks, ideas of state, education, science, art, poetry, etc. The cultural heritage came indirectly to us through the Catholic and Orthodox Church.

It was during the 1400s and the Renaissance that we rediscovered antiquity, which has since formed a kind of framework for our culture, all the way through the age of enlightenment and industrialism.

Today I see another creation myth taking shape, a postmodern description, focusing mostly on the events just before and during the Second World War. The ultimate evil is represented here by the German Nazis who triggered the war with all its horrors, and killed 6 million Jews.

The western liberal democracies were the good knights who finally defeated evil. The myth ends with the words that we must never let this happen again. From 1945 onwards, the world would improve and goodness spread.

Out of this conflict between light and darkness, the postmodern world was born, what was before becomes increasingly blurred, vague and undefined. It is a simplified myth, painted with broad brush strokes, where Satan is a man with a toothbrush moustache, sweaty forelock and uniform.

Movies and media daily draw us to the Nazis’ ills. And we are often warned that we must be on our guard so that Nazism does not show its ugly face once again.

As soon as we refer to something really bad, we pull up 1930s Germany. It’s a joking truth that most debates on the internet end with Hitler, all discussions carry to the Third Reich.

The German dictator is also used extensively to flatten out opponents, the argumentation technique is called reductio ad Hitlerum. Maybe it is that people have such poor historical frame of reference that brown shirts are the only thing one can refer to?

That the good knights in their fight against fascists and Nazis felt compelled to ally themselves with the Soviet Union (which made the biggest genocide of all) is sinking the fairy tale. Turkey also belonged to the good, despite the genocide of about 1.5 million Armenians, which is still unrecognized to this day.

At the end of the war on February 13-15, 1945, the Allies sent 1249 heavy bombers to the baroque city of Dresden, releasing 3900 tons of bombs. The city had no special military or strategic value, the bombing was a revenge for German bombings in Britain. The release of two nuclear bombs on the civilian population in Japan to end the war has also been silently accepted as a necessary evil.

Then peace came, and the UN became the body that would spread the message of brotherhood and the equal value of all. So diligent in their work that they recently gave Venezuela a seat on the Human Rights Council. And Saudi Arabia already has a seat on the UN Women’s Commission.

I do not want to neglect the Germans’ iniquities and genocides, what they did was abominable. But what if the allies, instead of monstrous revenge bombings, had dropped a few bombs on the narrow railroad tracks that transported the Jews to the concentration camps, to hinder the genocide? This is the kind of thing that we would rather not think about.

The totalitarian societies of the 20th century murdered millions and again millions of people. It happened not only in Germany, but also in the Soviet Union, China, Turkey, Cambodia and even today in Rwanda, Sudan etc. And Hitler was not the prime devil but merely a demon among other demons.

The devil, on the other hand, is in the details. And the question is if we learned anything? We still cling to totalitarian ideas. We still believe that society can be centrally planned from above, and that resources and privileges should be reallocated by a select few. Too many people think that politicians need to do something, instead of allowing the people from below to build society.

Autocratic societies are marketed in different colours and flavours, but all follow the same pattern. Only one opinion is tolerated, different thinkers are bullied, while those who harbour the sanctioned opinions are rewarded. In the end, no one dares to open their mouths, because anyone can be an informer or rat. No one dares to do anything about the situation, too much is at stake and you do not want to jeopardize your family’s safety.

It’s best to play along, go to work, do your duty, and become a bully yourself, hoping that brighter days will come sometime in the future. It doesn’t take much imagination to recognize the situation. And we are very much aware of our wrongdoings. We never have to ask ourselves how it could happen? Or tell ourselves that it will never happen again.

Even the utmost evil is populated by small (previously) kind people who merely follow the current or obey the authority. And the excuses and evasions become extremely thin, when one day they are forced to explain their deeds.

Finally, a creation myth should elevate man from weakness and darkness. Shame, guilt and lack of self-esteem will not move mankind forward. Despite all our faults and shortcomings, we created this fantastic civilization, with all it’s great social, technical and medical achievements. Something our ancestors couldn’t even dream of. We deserve better myths.