Special treatment in the name of justice 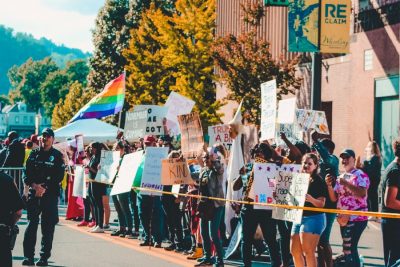 Code of conduct and rights manifestos can spoil the best of organizations, just look at Linux where it was decided to include more vulnerable groups, and soon MAGA caps and images of Trump-Tower were banned , and most of their charity funds now goes to diversity programs. The staff were actually advised not to pay tribute to their democratically elected president. Linux has been transformed into a left-wing organization. Google has also met a similar fate.

Another example is the Swedish Pirate Party, which was a growing force with a seat in the European Parliament, until the gender, LGBTQ and other issues above the real purpose of the party were raised. Today, the Pirate Party is fragmented and irrelevant in politics.

But wait a minute now, what’s wrong with supporting vulnerable groups? Isn’t that a good thing?

It may seem so at first glance, but it is often a cleverly constructed trap of the left. What we are talking about is not general human rights – because we already have this through the UN and the law book – but about special treatment of specific groups.

Equality before the law and human rights provide us with tools for a just society. Why is there a need for specific rules for minorities, vulnerable groups etc? The simple answer is that it is not really needed, since we are all human, and that also includes LGBT people, whites, blacks, men, women, etc.

In addition, by claiming that certain groups are still being discriminated against, one can also create exceptions and require that these groups be further highlighted, which results in a kind of special treatment.

But is that not true? Is it not that certain groups are still discriminated against?

Sure, there can be discrimination, especially at the individual level, since some people simply choose not to spend time with certain groups. But before the state and the law, we are all equal.

Can’t you also demand that individuals treat each other equally even on an individual level?

No not really. There is something called free association, and it is the right to hang out with whomever you want. In the private you can discriminate, but you yourself can expect to be discriminated against if you behave badly. It is more about politeness and an accepted behaviour between people.

Now we are living in a time when it is permissible to promote certain groups. If a company rewards women and coloured people for employment, it is considered by many to be acceptable.

Certainly not, since today’s special treatment is based on victim mentality and vulnerability. It is only so-called weak groups that may be raised and treated separately. One may wonder how this pre-produced map of vulnerability was created, but we may return to this at another time.

White middle-aged men are not included in the crowd of the vulnerable, even though we are a smaller group globally. Indians and East Asians are the largest groups, and they still have the largest population increase. So, the entire prevailing justice debate can only be seen in a Western white context. Coloured people are possibly a minority in the West, but hardly in the rest of the world.

Therefore, the reverse track – on the basis of the same logic – is to specifically select white men instead for certain jobs and positions. If we have created a society based on ethno-privileges then the card game can of course be reshuffled. You must be prepared for that.

Or we return to the idea of ​​knowledge, experience and skill. That we simply employ the best suited. It is called meritocracy, and was the original idea of ​​justice, far away from today’s rights-demanding vulnerability culture, which is destructive and counterproductive to most organizations’ goals and objectives.