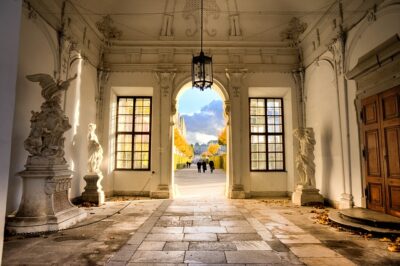 The libertarian philosopher Hans-Hermann Hoppe advocates a state in which a dictatorial inherited entrepreneur rules the country. Some may see the leader as a monarch, while others see him as a business leader, who may be deposed by the shareholders / people if he does not make the right decision for the company / country. Thinkers like Curtis Yarvin (Mencius Moldbug) are also reflected here.

Hoppe stands very close to the monarchy (especially the Habsburgs) and points out all its virtues, but he also emphasizes that he is not a monarchist. Perhaps his ambiguity has contributed to both speculation and over-interpretation? And probably he would have remained a relatively unknown philosopher without this controversial craze.

Hoppe and Yarvin deliver a contemporary critique of today’s deep state and unmanageable bureaucracy, which is supposedly democratic, but constantly restricts the citizens no matter which party they vote for. “Even a king would be better”, says Hoppe in this situation. And some say that’s true.

Autocracy, however, runs counter to our Central and Northern European heritage, where disputes and the exercise of power were most often carried out in groups, at courts, state parliaments, and so on. Even the king was elected, the system was called the electoral kingdom, which was finally abolished by Gustav Vasa in Sweden.

The idea of ​​an autocratic regent of God’s grace is an oriental tradition that has taken root in Europe through Greeks and Romans, but is foreign to us. Not even the kings of Sparta were authoritarian, they could be deposed by the council of the elders. While Persians, Egyptians, Chinese, and Japanese had god kings whose offices were inherited.

We Europeans stand out with a more egalitarian order, which is both interesting and unique. The leader must be able to be dismissed without popular uprising. The council acts as an emergency brake. If the regent does not obey the council, only then is it the people’s turn to act. The regent also has a moral obligation to the council, since he himself is involved, and it was the council that appointed him. Most historical monarchies in Europe had an egalitarian base, few monarchs were autocratic.

Even companies are often led by a board, they are not qualified “dictatorships”, even if there is a designated chairman. And as long as the company is doing well, the board has the shareholders’ trust. In the business world, on the other hand, you have simpler goals, a coffee cup factory should manufacture coffee cups and sell them with the highest possible profit. A society has several different sub-goals, which may not be as concrete.

Regardless of Hoppe’s discourse regarding ownership, continuity, time horizon and responsibility. Hereditary monarchy can be considered a genetic lottery, where the incentives can be to drink, hunt, and meet ladies – instead of running their kingdom.

The right to popular representation goes deep into our culture. The republic and democracy are by no means new inventions, regardless of their current degenerate forms. They have their roots in the councils of the elders and ancient courts, which go back to prehistoric times. Let’s not throw the baby out with the bathwater. The future should be built on a solid and lasting foundation. Autonomous kings with crowns and mantles have more resemblance with Disney movies than reality.