The Industrial Revolution in Ancient Alexandria 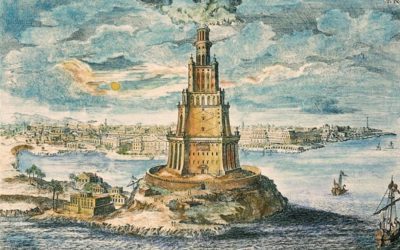 What if the Romans had not conquered the eastern Mediterranean, but left the Greeks alone to develop steam engines, astrolabes and all manner of architectural and mechanical novelties, in prominent cities like Alexandria, Syracuse, Athens and Ephesus?

Could the industrial revolution have started as early as 100 AD? The events that happened in England around 1800 and changed the whole world. Could this development have started much earlier?

Greek science probably reached its zenith with Heron of Alexandria (10 BC – 70 AD). He created steam engines, wind-powered organs, mechanical figures for theatres, improved pumping systems and fountains, among other things. During the Roman conquest, the spirit of innovation disappeared. There was something in Roman culture that opposed technological development. Although the Romans appreciated Greek art and architecture, invention and the search for novelty all but disappeared in the centuries that followed.

The reason why the ancient peoples did not achieve industrialism is often explained by the widespread slavery, and the consequent lack of need for machines and automation on the same scale. This is also a gross oversimplification, as slavery was not free, but contributed to a number of costs, not only in terms of purchasing the slaves, but also in terms of food, drink, clothing, shelter, medical care, etc. Therefore, simpler machines and inventions could have reduced costs and simplified life even in ancient times.

The first steam engines in England at the end of the 17th century were used to pump water from underground mines. These were ingenious machines for their time, but still simple devices, not unlike the ancient experimental versions of the Greeks. Then it took another 100-150 years of improvements before steam power was used in factories, to power trains on rails and ships across oceans etc. Industrialism was then already in full swing.

We imagine that the Greeks mostly used steam power for effect, to open temple gates to create a dramatic feel. When we consider how large some of the temples were, and that the gates were sometimes covered in copper, we realise that opening could be a real problem. If the development of steam power continued undisturbed in the Greek world for another few hundred years (about 100-200 AD), I can certainly imagine steam-powered ships and much more. And then we would certainly have had an industrial revolution, perhaps not in the same way as in the 19th century, but something similar.

Greek shipping was intense and boats were getting bigger, and it took a lot of rowers to push the galleys along the coasts. Much of the cargo space was used to accommodate all these people pushing the boat forward. Many merchant ships had sails and lacked rowers, but they were often smaller, and dependent on the weather and wind. Navigation was along the coasts and rarely on the open sea. Steam-powered ships would probably have made a big difference.

It could have been a wondrous feeling to watch the great steamers leave the port of Alexandria in the morning, and to see the great paddle-wheels slowly breaking the water’s surface and propelling the vessels beyond the mighty lighthouse.

If the Greeks had been allowed to rule, we would probably have seen a patchwork of small states instead of great empires. The Alexander Empire collapsed into smaller units, and began to look more and more like the situation before the Conquest. Some Greek actor might well have embarked on new campaigns, the Ptolemaic Empire being a likely candidate, Macedonia, Pergamon or possibly a united Sicily? But one gets the feeling that even this empire would fall apart after a while, due to the peculiar Greek individualism and the old culture of independent city-states.

Possibly the Mediterranean peoples had conquered and colonised Central and Northern Europe precisely because of their technological superiority. And created cities, infrastructure and trade on the Hellenistic model. Perhaps Europe, Anatolia and Egypt would belong to the same civilisation. Any barbarian invasions would probably have been met by cannon and Greek fire.

The Greek world would sooner or later have been challenged by cultural or religious schisms, it is probably inevitable. Possibly Christianity would not have arisen in this scenario. We would have had other religions with other gods, challenging the Olympian deity system that was already losing its lustre in Hellenistic times. Perhaps secular society would have emerged sooner, with the role of religion increasingly downplayed? And perhaps here too we would have seen a movement to abolish slavery?

The reason why the industrial revolution did not start in antiquity was probably due to the fulfilment of three important criteria:

The Greeks were indeed a very traditional people by our standards. Much revolved around small rituals and religious activities, as their ancestors had done for centuries. At the same time, there was a curiosity, individualism and spirit of discovery that contributed to the colonisation of the Mediterranean, the development of trade and major scientific discoveries. The Greeks resembled modern humans in some respects, but they also saw magical creatures in lakes and rivers. Nature and the whole universe were animated, but there was an order to life, everything followed certain rules.

It is possible that the small scale and regionalism indirectly contributed to the spread of science. Some Greek city-states were more open to new ideas and others were more closed. This created institutional competition, and scientists could settle in the places that offered them the best conditions, to their own benefit and that of the city.

The Romans were not as liberal, and their own contribution to philosophy and science was small. They disrupted the Greeks’ delicate phase of development just as it was beginning to take off. With the annexation of Greek Sicily (c. 241 BC), the invasion of Greece and the destruction of Corinth (146 BC), and finally the conquest of the Ptolemaic empire (30 BC). All this happened during the most prosperous years of Greek science. And then it was quiet.

However, the printing press was not invented during the Hellenistic era, and I suspect that this innovation contributed greatly to the spread of the industrial revolution in the 19th century. Large editions of printed books spread knowledge beyond their own small circle. A critical mass of learned people was reached, who could further develop the innovations, find new applications, and train new followers so that the knowledge did not die out. The large and rapid spread of knowledge also protected against external interference, giving ideas a better chance of survival. Although there were precursors to book printing in China before Gutenberg around 650 AD, even the innovative Chinese did not achieve industrialism before the British inventors and manufacturers of the 19th century. Perhaps the missing piece of the puzzle in Southeast Asia, as in Rome, was openness and willingness.