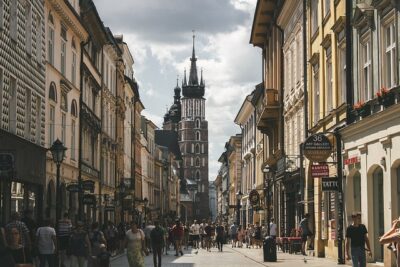 Before I had time to really reflect, I had impulsively bought a plane ticket to Krakow. It didn’t cost very much, thanks to the new low-cost airlines that have taken over the market, and it was a direct flight, with no annoying stopovers, to the airport named after the Polish Pope John Paul II. An unusually modernist and out-of-place airport given the city’s historical origins. Why not build an airport in neoclassical style, or even neo-Gothic? Surely modernism was in decline? If you wanted to appear different and forward-looking, perhaps glass and steel boxes should not be the obvious choice nowadays.

Anyway, now I was sitting in a simple hotel room with a nice view of the beautiful city. And I was plotting my next move, as well as piecing together all the loose ends of this incomprehensible story.

Although it seemed extremely odd, I was sure that the Count had used a satellite phone from a submarine in surface mode when he contacted me. Perhaps he had visited the mysterious Alicia who ran a research institute operating in Antarctica. The question is whether a submarine would be the best means of travel to this remote place? After some quick research, it turned out that travelling to the glaciated continent was not easy. Usually one crossed from via Argentina or Chile, either by plane or boat; and that ticket was probably considerably more expensive than to Krakow.

And no matter how I searched for Alicia or any of the Count’s other acquaintances online, I found absolutely nothing, it was as if they never existed or as if the traces of them had been swept away very carefully. There was simply no research institute run by Alicia von Sturmstadt, nor did there seem to be a woman by that name. Nor was there a count named Archibald Iratus who had ever lived on Jungfrugatan in Stockholm. Despite having met him countless times. Well, not everyone left a trace on the net, but it was a bit strange after all.

I looked at the address I had written down on an old receipt after our last conversation. It was a place somewhere in the Old Town, in the direction of the Wawel Royal Palace. The idea was that I would deal with this tomorrow, it was already late afternoon, today I just wanted to take a short walk along the street by the hotel, in search of some good Central European food and a beer or two. And then rest.

However, after a good meal, an excellent sausage and sauerkraut stew and a large glass of Perła, my curiosity began to get the better of me, and I found myself drawn to the address the Count had given me.

When I felt most lost, I suddenly found myself in front of the shop window; a small unremarkable bookshop, or antiquarian bookshop really, or both. On the ground floor of a large old turn-of-the-century palace, the lower part of which resembled rough Hellenistic defensive walls and the upper part more like Hanseatic brickwork architecture. I walked in, and an elderly gentleman greeted me with a brief Polish salutation. When he noticed that I didn’t speak the language, he quickly switched to near-perfect English. He was wearing some sort of tweed suit and a hand-tied bow tie that was a little loose and needed tightening. He waved a pair of thin, elegant reading glasses at the shelves, stroking his well-trimmed grey moustache.

I told him briefly that the Count had sent me, and that I was to fetch a book. Then he walked hastily to the shop window, looked out over the street, turned the sign to read “closed” and locked the door. We walked further into the store, to what was probably the combined warehouse and office. I don’t think I’d ever seen such an enormous amount of books in such a confined space in my life, from the wall-mounted shelves to the benches around the central desk at the window side, gathered in various little piles, with labels and notes tucked in here and there.

– Yes, we are working with Internet nowadays, the man explained, and we deliver books to customers all over the world.

– I know who you are,” interrupted the store owner.

– And to whom do I have the honour of speaking?

– In that way. How do you do? Nice to meet you. I’ve been working on recording Archibald’s life stories and thoughts, until one day he decided to go away. He called me some time ago and asked me to visit Krakow. So, here I am.

– Here’s the book,’ said the cousin, handing me a packet wrapped in rough brown paper.

Ignatius was as quiet and secretive as Archibald was loud and talkative, they seemed each other’s opposites. There I stood with the book in my hand, and I had plenty of questions, while the man in front of me started walking towards the entrance to show me out.

– Do you know where Archibald is? I tried.

– No, he doesn’t tell me much about his whereabouts.

Soon I was standing in the street again. This time I turned the wrong way, and had to walk a long way to get back to the hotel. Once in my room, I could hardly wait to tear off the wrapping paper. I stopped halfway. The Count hadn’t actually told me whether I should read the book myself, or just pick it up and keep it for him until he got back. But since the packing was already half gone, I continued.

It turned out to be an older English-language edition of The History of Herodotus. It was tattered and patchy, it looked like it had been through a few things. The pages contained lots of comments and footnotes written in a neat hard-edged style. On the front cover the owner’s name appeared, it was none other than Laszlo Almasy, the famous Hungarian aviator and explorer. I shuddered a little. Perhaps Almasy had brought this particular book with him on his expeditions in 1933, when he discovered the famous cave of the swimmers of Gilf Kebir. The discovery showed that during Neolithic times, some 10,000 years ago, there were lakes or rivers in the Sahara desert.

His notes were written in Hungarian, although English text appeared here and there. Almasy had been educated in England and remained an Anglophile for the rest of his life, although he fought on the side of the Germans in the war with Rommel. Some thought he was a double agent. The Russians were on the lookout for him at the end of the war, but British security smuggled him out of Hungary, and on to Egypt where he lived quietly until his death in 1951.

Now I sat with Almasy’s thumbed copy of Herodotus in my hands. Full of supposedly erudite notes. It felt a bit like a confirmation, at last a real historical person appeared in this diffuse saga, a person whose deeds were well documented, even if he was partly forgotten and his life story was as mysterious as that of the Count and his friends. I decided to re-read Herodotus, and to buy a Hungarian dictionary to decipher the comments in the book.