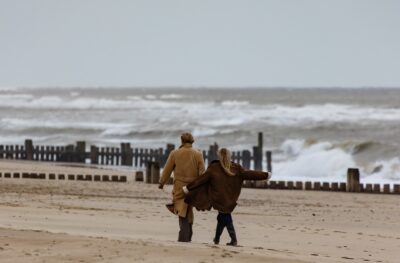 I like walking, and have been doing it for a long time, from long walks in Stockholm to beach walks in faraway lands. Many people put on their tracksuits and jog as an excuse to get outside, or go for a bike ride at breakneck speed along newly constructed bike lanes. You kind of have to have an excuse to show your face outside. Walking with the dog is perhaps the most common, which isn’t really a classic walk as the idea is that you should be able to go wherever you want on your own without a four-legged companion directing the journey and demanding attention. Nothing wrong with trainers, bikes and dogs, but it’s something else I want to do. The idea of going out into the world with no purpose or goal, and with the possibility of ending up in unexpected places or meeting unknown people.

People who walk around aimlessly are almost considered suspicious these days. Especially if you don’t even have a phone with you or headphones. The lack of specific destination is strange and perhaps a bit crazy.

At the same time, walking has served many interesting functions throughout history, from Aristotle’s peripatetic school where participants walked and conversed with each other, to the philosopher Kant of Köningsberg who was famous for his timely walks, where you could set your watch by him. During the 17th-18th centuries, many beautiful and magnificent promenades were built in Europe’s major cities, from the Champs Èlysées in Paris to Nevsky Prospekt in St Petersburg. Walking at a leisurely pace was the preserve of the bourgeoisie, and of course showing off and being seen in public was all part of the fun.

A walk is not really exercise, but it does involve physical movement and has refreshing elements, requiring no aids or vehicles. It’s slow going, but you still move from one place to another. And in today’s congested urban traffic, walking becomes a competitive alternative. If it weren’t for the fact that the outdoor environment is becoming increasingly blighted, cluttered, littered and populated by criminals.

Walking as a phenomenon is not as pleasant as it used to be, unless you live in cities like Budapest, Zagreb, etc. where the beautiful and eternal still have a place in people’s hearts. Many other Western European cities offer some resistance to pedestrians, the same is true in the US where there are hardly any sidewalks in some cities. These urban environments were built without a thought for pedestrians, but more as a sanctuary to modernism, speed and automobilism. Today they are no longer as futuristic, but often run down, and as outdated as they once appeared to be modern. An era that made a lot of noise, but was relatively short-lived, modernism quickly became obsolete. The walker has to resign himself to wandering in its late ruins, among concrete, glass, steel and desolation. Not everything man undertakes is successful. Perhaps our minds will clear up from the perspective of walking, with both feet on the ground, tied to our own bodies and the innate mobility nature has endowed us with.